I would have to admit that I have never had a complete understanding of the resurgence of coloring book popularity.  Are people actually coloring in the pictures?  Personally, I have a complex about making any kind of marks in my books, so the idea of taking some sharpies to every other page of a previously nice book sets my teeth on edge.

(The fact that from childhood I’ve had all the art talent of a Rhesus Monkey may also have had something to do with it.)

Fortunately, you don’t actually have to go all Picasso on the recent “Dragon Age Adult Coloring Book” to enjoy it.  The volume of 45 different line drawings is a fun look back down memory lane at characters spanning the length of the entire “Dragon Age” saga.  Each character gets a two-page spread of a color-able drawing and one of their memorable or distinctive quotes.

The pictures are, by and large, incredibly detailed and the poses are pretty characteristic of their subjects:  Mages are casting, warriors are fighting, Oghren is drinking, and Loghain is betraying everybody.  Even some of the lesser antagonists like Branka and the Lady of the Forest make it in, as well as DLC teammates Sebastian and Tallis.  More important characters may make several appearances, like Anders and Morrigan.

If there was one quibble I had with it, it would be that some of the depictions don’t really match with the mental image I have of the characters…but that’s probably just secondary to the difference in the mediums and their different resolutions, particularly  looking at Thedas denizens from 8-year-old DAO. 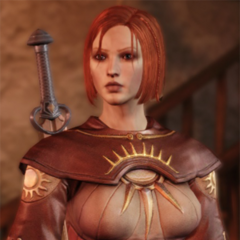 Whether you enjoy coloring or just like the idea of perusing it as more of a scrapbook, the “Dragon Age Adult Coloring Book” should help keep you occupied while waiting to see when/if the next in-universe comic/game will come out.

Magekiller #5 continues Greg Rucka’s story of Tessa and Marius–mage-killing mercenaries set in the Dragon Age universe, at the time of Dragon Age Inquisition.

In this fifth and final issue of Magekiller, Tessa and Marius are drawn into the Inquisition’s end-game battle against Corypheus.  Called back to Skyhold at the end of the last book, they are tasked with preparing the way for the Inquisitor’s last charge to defeat the ancient darkspawn and close the rift before Thedas is overrun by demons.

While the issue has its usual grandly satisfying battle at the end, it’s possible to feel a little disappointed that ultimately the story of Magekiller never really intersects in a major way with that of Inquisition.  In retrospect, it seems obvious that this is the easiest way to ensure the least amount of conflict with any of the player-dependent resolutions, but it does make Tessa and Marius’ story seem a little smaller in scope than it initially appeared.

What it does get right in these final moments with the two mercenaries-turned-heroes, is a good look into the core of the whole story–the relationship between the two mercenaries.  While the past they clearly share has resulted in a close partnership, we’ve never really been given much of a picture as to exactly what that is.  The romantic couplings they’ve each revealed with time has shown us that they’re not lovers, but has also shown us that there is much they simply do not know of each other.

As with the successive volumes, the biggest thrill is seeing familiar faces and places, and this time we get some quick views of Skyhold and the boyishly enthusiastic Sutherland and Co.  Similarly to the game, I continually found myself expecting their death and destruction, but they constantly prove to be hardier than the red shirts they appear.

While our heroes do get some resolution, there feels like so much more that was hinted at in previous issues that we never learn.  Issue #2, my personal favorite, held so much potential with its view into Tevinter and its decadent politics, not to mention Marius’ past life as a slave, that it seems a waste none of that was ever alluded to again.

From her voiceover, we have a constant view on how Tessa feels about Marius…but how does he regard her?  Is he capable of putting anything above his mission?  In only 27 pages, we don’t get all the answers, but we get enough to wish we had more.  Cross our fingers, maybe we haven’t seen the last of Magekiller.

Magekillers #4 continues Greg Rucka’s story of Tessa and Marius–mage-killing mercenaries set in the Dragon Age universe, at the time of Dragon Age Inquisition.

In this fourth volume of the Dragon Age side-story, Tessa and Marius seem to have become agents of the Inquisition, assigned to survey the Hissing Wastes–an area which proves to be just as unpleasant to inhabit, as it was to play.  When they discover the Venatori up to their old tricks, some familiar faces join them in an attempt to halt evil, give aid to the downtrodden, and get away from the sand.

After last month’s return to the “book-long fight structure,” this issue was a marked improvement.  Although it again centers around a huge action sequence, the involvement of a large cast and the emphasis on the combat strategy lends it added interest.  More character development is present as well, this time integrated better into the story versus delivered through voice over narration as in earlier months.  Marius in particular benefits from a subplot that reveals him as capable of becoming something more than another embittered ex-slave.

Ultimately however, the book brings back one of my favorite characters from DAI, so I’m hardly objective about it.  At its heart, I feel that this is the main appeal of the series–it gives us a little more time to spend with the world of Dragon Age and its denizens.  As long as they continue to be drawn true to life…or game…I’m all in.

The third volume of this Dragon Age tie-in shows Tessa and Marius doing what they do best–reluctantly, and against their better judgement–helping the needy.  With the introduction last volume of the omnipresent fade rifts in the sky spewing out demons, there is no shortage of people in peril or creatures bringing peril, and the pair barely hesitate to jump in between them.

This month, we seem to have returned to the basic structure of the first issue, in which most of the book is taken up by a colossal and dramatic fight, with Tessa doing voice-over exposition around it.  While it’s of interest to learn about Tessa’s background, and certainly essential to set up the fade rift situation, the latter is knowledge that anyone familiar with Dragon Age Inquisition is likely to find pretty basic.  The result is that the tale feels essentially like an extended fight with an interesting cameo fixing to take the pair into the next stage of their adventure at the end.

For me, this episode was a bit of a stumble.  Besides the fact that most of it was Dragon Age Inquisition 101 for me (not their fault,) it hits my main beef with a lot of comics, in that it’s so serialized, the one issue doesn’t seem to contain a complete story.  The art continues beautiful, but the battle action seems a trifle hard to follow and I was never totally sure how it finally ended.  Even the characterization feels a little off as Marius later reacts more naively to Tessa’s jokes than you’d think a magister’s slave and lover would.

It’s still worth reading, in my opinion, if just for the insight into Tessa’s past and the glimpse at a familiar face from Inquisition…but if you had to skip one of the series, thus far, this would be the one.

This installment starts off with the Tevinter ruler Archon Radonis explaining the job he has for the captured duo.  No surprise, considering the line of work they’re in, it involves killing some fairly high-profile magisters, but if beggars can’t be choosers, then neither can rogues at the staff’s end of the most powerful mage in the most powerful mage-filled country in Thedas.  It quickly becomes evident that a grim future awaits them whether they finish the job or not, when an unexpected encounter with an old friend further complicates the situation.

While the first issue last month seemed a little heavy on the exposition, as you’d expect for an entry point to something as hugely designed as the World of Thedas, this issue really kicked the story into gear.  Action-heavy, it almost seems as though it could have been fleshed out a little more–the pair accomplish some complicated assassinations with considerable set up in the space of five pages.  The economy of storytelling is admirable, but it’s a mark of how engaging the characters are, that we’d enjoy spending more time with them.

This time around the references to events and characters from Dragon Age Inquisition fly fast and furious, and Tessa and Marius seem fated to be embroiled in its affairs far sooner than I would have anticipated.  The art continues at a high grade and Carmen Carnero’s pencils depict Tevinter with just the decaying grandeur and sybaritic elegance you’d imagine.  For anyone reading the books as a .pdf (like I am,) be sure to view it in the two page format in order to fully appreciate the pretty cross-page assassination layouts.  It’s a fun start to an engaging story that will hopefully fill in some of the already-immense Dragon Age backstory.

Magekillers #1 starts a new chapter in the world of Thedas, as Greg Rucka brings us a story of mage-killing mercenaries set in the Dragon Age universe. 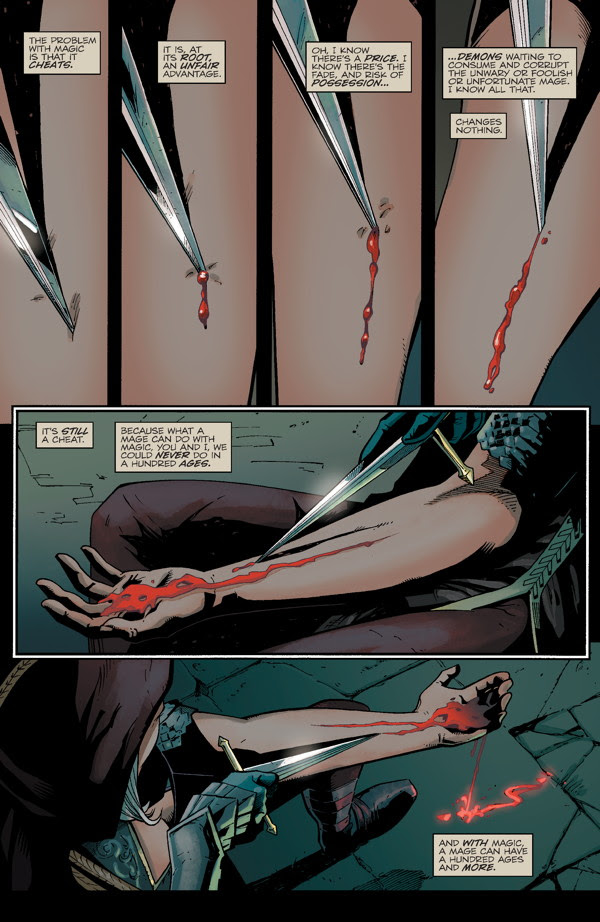 While this first book has the burden of setting up and introducing new readers to the extensive lore of Thedas, it cleverly interweaves the exposition with a dramatic battle illustrating the dangers of blood magic and apostates.  Your leads in this journey are Tessa and Marius–a glib scoundrel and a taciturn ex-slave from Tevinter; partners who seem more than a little familiar to those who rolled a rogue purple Hawke and romanced Fenris in Dragon Age II. 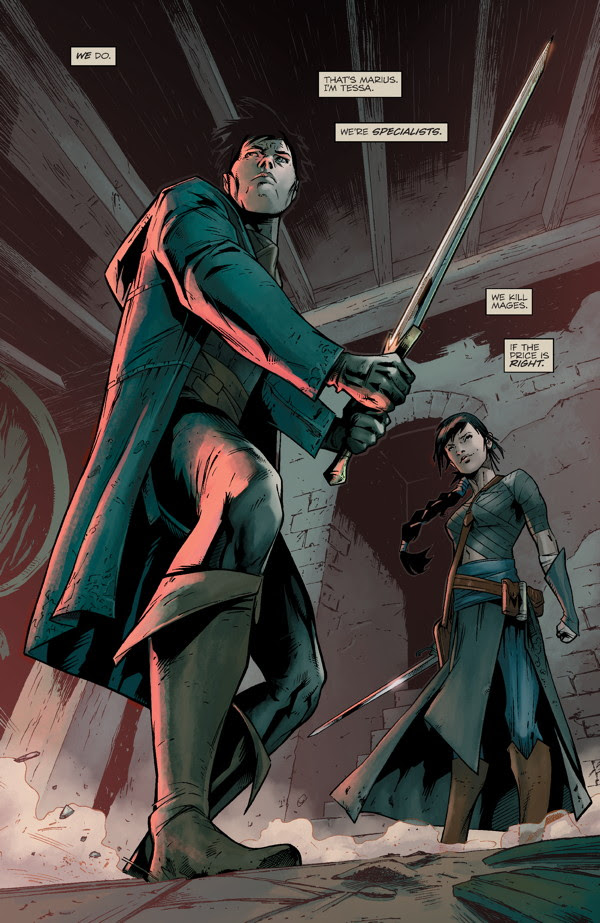 If people new to the Dragon Age franchise will have a reasonable amount of backstory explained to them, veterans will have a few nods as well, as references are made to such storyline staples as the literary works of Varric Tethras.

The art is beautiful and the story seems expertly paced and placed, as the characters begin what promises to be a dicey assignment in Minrathous–capital of Tevinter, and likely important location for the hinted-at sequel to Dragon Age Inquisition.  Although few details about our heroes’ job or their illustrious employer are handed out this time around, the potential is certainly vast enough for me to hold my interest for the upcoming issues.